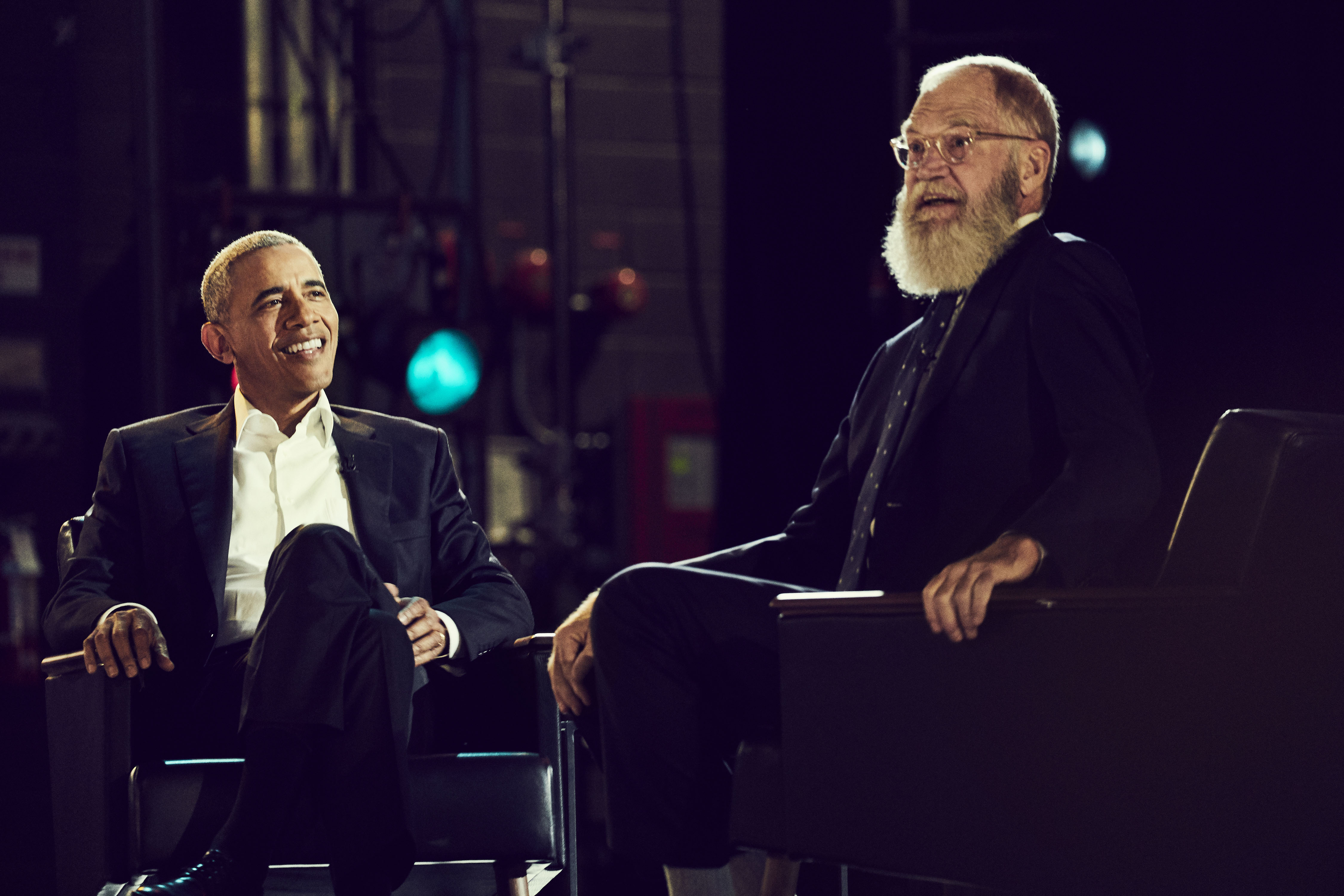 With Barack Obama from the first episode of My Next Guest Needs No Introduction. Image via Variety.

The surprising empathy of My Next Guest Needs No Introduction

“How’d you like being in jail?” he suddenly asks after a few softball questions about spending time in New York and which city she likes better. The audience laughs. She looks uncomfortable. “That’s just awful” he smirks. She tries to pivot. He digs in: “How was the food?” “Three meals a day?” “What did you do to keep your energy up?” “Do you know what you did?” The guest was Paris Hilton, fresh out of spending time in jail for driving with an invalid license in 2007, a guest on the Late Show with David Letterman, there to promote a new fragrance. Hilton uncomfortable, Letterman is clearly enjoying himself, laughing as he asks the next question. “It was a part of my life and I don’t want to talk about it anymore,” she finally says. “See, that’s where we are different. It’s all I want to talk about,” he quips, continuing his line of questions.

This interview, perhaps one of Letterman’s most famous — never far behind the infamous Joaquin Phoenix stunt — is in many ways, quintessential Letterman. His disdain for show business was part of his brand. He was the anti-Carson: irreverent, sarcastic, self-deprecating, and sometimes just plain weird. He wouldn’t hide his feelings about a guest. He filmed an episode entirely upside down. He made guests uncomfortable. Guests were often so scared to come on his show it became a David Foster Wallace short story! In retrospect, not getting the Tonight Show was likely the best think to happen in his career — the Tonight Show is a mainstream brand and Letterman was not — is not — a mainstream performer.1

Thinking about that Letterman is what makes My Next Guest Needs No Introduction so fascinating. That David Letterman is nowhere to be found in his post-Late Show Netflix show. No longer antagonistic, but deferential. The jokes are few, the conversations skewing more serious. “He can seem like a bizarro version of the talk-show host who once revolutionized late night,” writes Jason Zinoman in the New York Times, “a cheerful, earnest man, deferential to fame, a Letterman without irony.” Letterman, of course, was heading towards this for a few years. After his sudden open-heart surgery in 2000 he began to soften — though, unfortunately for Hilton, not always. The last few years on CBS was notably quieter, nicer, the interviews a bit longer.

Each episode of My Next Guest Needs No Introduction has one guest on for an intimate conversation on a bare stage in front of a small audience, occasionally interspersed with in-the-field pieces — a related guest, visiting a restaurant or hometown, etc. But this show — as all longform interviews inevidibly are — is very much about David Letterman. With Barack Obama, in his first post-presidency interview, the two talk about getting older and being out of jobs. With George Clooney they talk about philanthropy and using fame and riches for good. With Tina Fey, they talk about women in comedy.2

But let’s not mistake this show for a vanity project. This show, in so many ways, is about repentance. What we are seeing is David Letterman, an old white man, assessing his life, trying to make sense of the world he finds himself, confessing to past mistakes, prejudices, and ignorance, wanting to make sure he doesn’t repeat them. In each episode, we watch Letterman wrestle with privilege, whiteness, ignorance, maleness. My favorite moment from the first season was his conversation with Jay-Z about their respective infidelities. Letterman confesses to the feeling he had of almost losing his family. With Obama, he wonders aloud about what he was doing when so many people were marching on Selma. When Kanye West says men are afraid in the Me Too era, Letterman pushes back arguing that fear is nothing compared to the fear women have had. When Ellen DeGenerous recounts her own sexual abuse, Letterman lets her lead, handling the conversation deftly and sensitively. The Letterman we see here is wrestling with his own past, finding a new empathy and understanding.3

Contrast this with another comedian’s vanity Netflix project: Comedians in Cars Getting Coffee. Jerry Seinfeld’s show is also ostensibly an interview show — as the title makes very clear, in each episode Jerry Seinfeld talks with a comedian in a car while they get coffee. But Comedians in Cars is really just a vehicle for Seinfeld to make Seinfeld jokes. In the first season on Netflix, Seinfeld was accused for ignorance and arrogance: making fun of a foreign name and more than one joke about transgender people and the Me Too movement. Where Seinfeld is unable to — or unwilling to — understand the world he finds himself in, responding with arrogance and entitlement, Letterman uses his new show to help himself understand. And in educating himself, he’s helping educate others.

The David Letterman of My Next Guest Needs No Introduction is not the David Letterman I grew up loving but that does not mean he’s worse. He’s showing us it’s okay to admit ignorance, it’s okay to admit mistakes, but only if you’re willing to learn from it. He’s an example of a man who is still growing, still learning, still trying to understand. He’s showing us that to empathize with each other, it’s not about talking, it’s about listening.