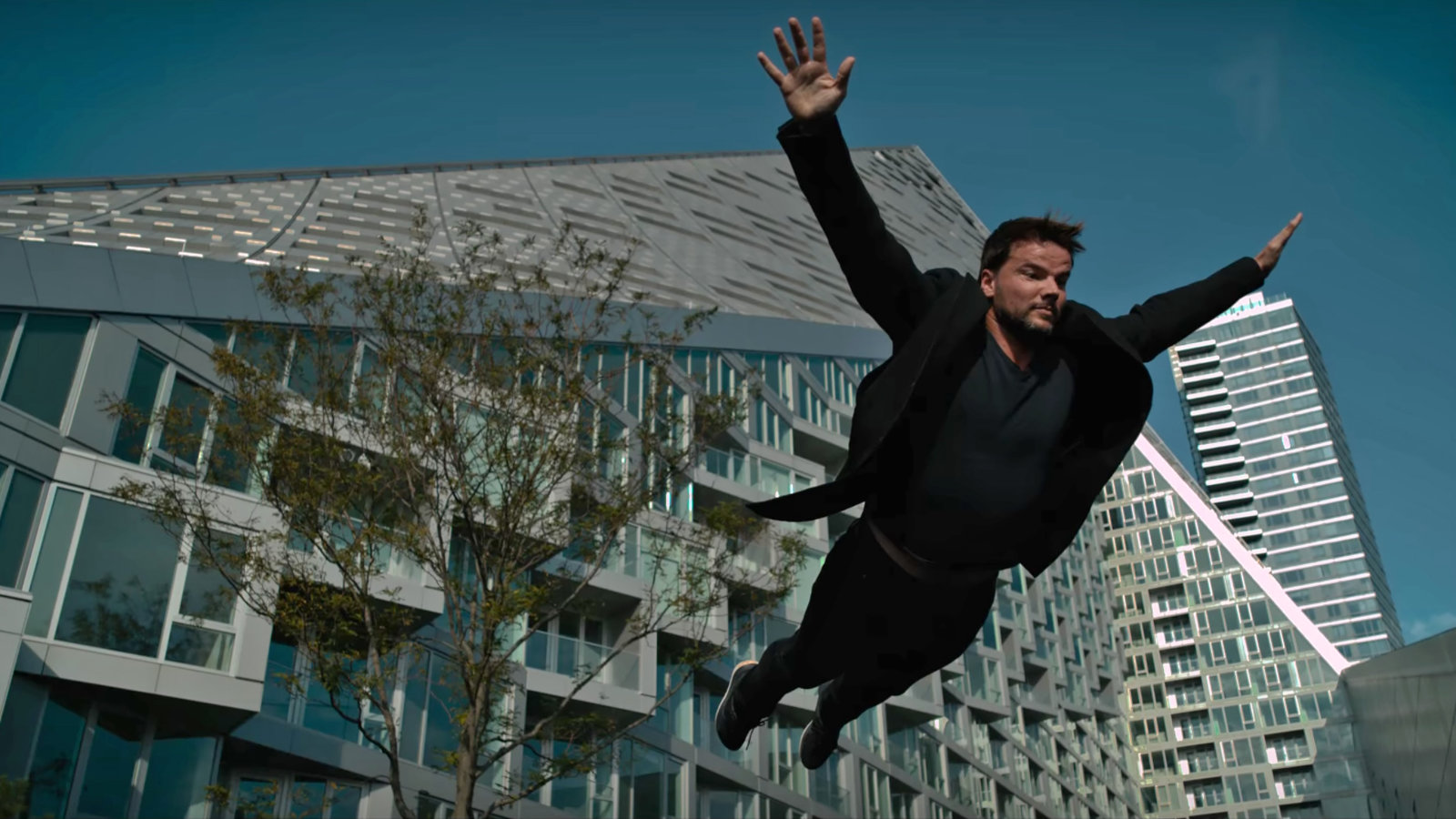 Bjarke Ingles as a superhero in season one.

“The entire globe has been encrusted with a geological layer of design” write Beatriz Colomina and Mark Wigley in their 2015 book Are We Human? Their thesis argues that there is no world outside of design anymore. From the phones that wake us up in the morning to the streets we get to work on; from the building I’m sitting inside at the keyboard I’m typing these words and the app in which they appear all the way to the satellites orbiting our planet, we can’t escape design. Everything was decided by people and many of those people were designers. So for those of us in the profession, this presents two opportunities: we can either educate those outside the design world about why things are the way they are, how design decisions influence our everyday life and illuminate the ideologies embedded in the built world or we can retreat, hiding behind jargon and shamanesque language to retain a type of power, and keep up an appearance of the creative genius conjuring new worlds out of nothing. Abstact, Netflix’s show about “the art of design”, that in October released its second season, and perhaps the biggest platform to talk about this work, unfortunately chose the latter.

Created by Scott Dadich, the former editor-in-chief at Wired, with Morgan Neville, the director and producer behind Netflix’s Chef Table — the show whose template the producers are clearly trying to replicate — Abstract debuted in 2017 with a mixed bag of episodes featuring celebrity designers across architecture (Bjarke Ingels) and graphic design (Paula Scher), illustration (Christoph Neiman) and shoe design (Tinker Hatfield). The show wrapped each profile in fast-paced editing, flashy visual effects, and cheeky animations; I agreed with Alexandra Lange’s assessment of the first season in Curbed: “It’s delightful to see so much money thrown at people who, almost unanimously, think best with a pen and a pad of paper.”

Yet all the visual flourishes and beautiful cinematography provide a distraction from the show’s glaring omission: clients, budgets, users, or, in fact, any hint of the real world. Yes, an episode with Paula Scher from season one does feature a client meeting but we don’t get to peek into the room after to hear how this feedback influences the design process. And in the strongest of the first season, the episode with Ralph Gilles, the head of design at Chrysler, we’re taken inside Chrysler’s design lab to we see iterations, presentations, and debate about elements of a current prototype. Gilles’s episode is one of the only to show conflict — the challenges to get the smallest details right and raise questions about user experience.

But in season two, Dadich and Neville double down on divorcing design from any relationship to our lives, focusing on the bold, the new, and the exciting; reinforcing the narrative that design is superficial, elite, expensive. While MIT Media Lab designer Neri Oxman is working at the edges of design and biology, her work is more likely to be encountered in a gallery than our homes. (The show’s producers are not to fault for this but her episode felt especially ill-timed with the Media Lab — and Oxman herself — still grappling with its fallout for accepting funds from Jeffrey Epstein. The now disgraced former director Jio Ito and founder Nicholas Negroponte, are prominent talking heads in her episode.) And though Ruth Carter, the great costume designer for people like Spike Lee and blockbusters like Black Panther is compelling on screen, I kept waiting for the episode to expand to fashion generally, looking at how clothes influence our lives, but Abstract seemed more interested in the technology she uses to prototype. Olafur Eliaison, the large scale installation artist, who’s episode follows him prepping for a new gallery show, leans so heavily on the abstract as to possibly make design even more confusing to viewers.

The worst of the episodes, however, is Ian Spalter’s, the lead designer at Instagram. The episode, ostensibly about “product design”, at times reads more like an hour long advertisement for the photo sharing app (complete with knocks on its competitor Snapchat’s design). The episode bizarrely spends an outsized amount of time on the app icon redesign instead of the app itself. This is perhaps so it doesn’t have to ask the larger questions about Instagram’s — and its parent company Facebook’s — role in redefining how we communicate with each other and everything that comes with that from smartphone addiction to destabilizing democracy. There’s a brief mention on how endless scrolling removes a natural stopping point when spending time in an app and a quick montage of news stories about Facebook’s recent scandals but the few minutes given to these questions ends, strangely, with the conclusion that “Instagram’s biggest challenge going forward…is staying Instagram.”

The episode with type designer Jonathan Hoefler redeems itself a bit with Wes Anderson-style interludes about the the basics of type design from kerning and leading to the optical illusions type designers incorporate into individual letterforms offering a new educational dimension to the episode. But are these the lessons a non designer should take away? That letters can be spaced differently and round letters are subtly taller? And though we follow Hoefler as he researches letterforms from mechanical watches for a new typeface, we never know exactly why? What’s this typeface trying to do outside of a personal interest for Mr. Hoefler? What about how typography influences our perception? Or how typography can connote authority? Or Trust? Or Humor? (There’s some interesting revisionist history in this episode as well, with Heofler taking credit for looking at the signage at New York’s Port Authority, causing him to begin Gotham. Just a few years ago, Hoefler’s former partner Tobias Frere-Jones was given credit for this work.) From season one, as well, Paula Scher mentions the poor design of the 2000 Florida ballot and its real world consequences, but time and again, Abstract seems uninterested in these questions.

It’s a shame, too, because every single one of the featured designers is obviously talented and smart and thinks deeply about their work but all too often, Abstract veers into hagiography (Bjarke Ingles literally is presented as a superhero flying from Via57, his New York pyramidal tower!) at a time when we should be focusing on ideas, not individuals. And yet, Abstract works best, ironically, when it does open its gaze, the few minutes it occasionally gives to put the designer’s work in some kind of context, as it begins to do with Hoefler’s episode. The best of the second season is the episode with toy designer Cas Holman, that spends less time on her own design work as it does on her philosophy of play. The aforementioned Gilles episode from season one, too, attempts to connect his work to the history of car design.

While watching the second season, I found myself thinking about Ways of Seeing, the 1972 BBC series by John Berger, another television show presented to a wide audience. In four thirty minute episodes, Berger not only decoded the ideologies imbedded in the visual images around us, from the renaissance paintings to contemporary advertising, but also gave viewers the tools to use themselves. He’s not trying to prove that visual culture is cool but rather seeks to teach us all how it influences our lives. A show like that is needed now more than ever. In a world where we can’t escape design, designers shouldn’t be hiding behind slick animations and flashy biopics, we should be shining a light on the ideologies that shape everything from fake news and filter bubbles, endless scrolling and roads are built to segregate neighborhoods. We should be making design easier to understand, not more abstract.

Winter 2020 Playlist: A Ship Out to Nowhere