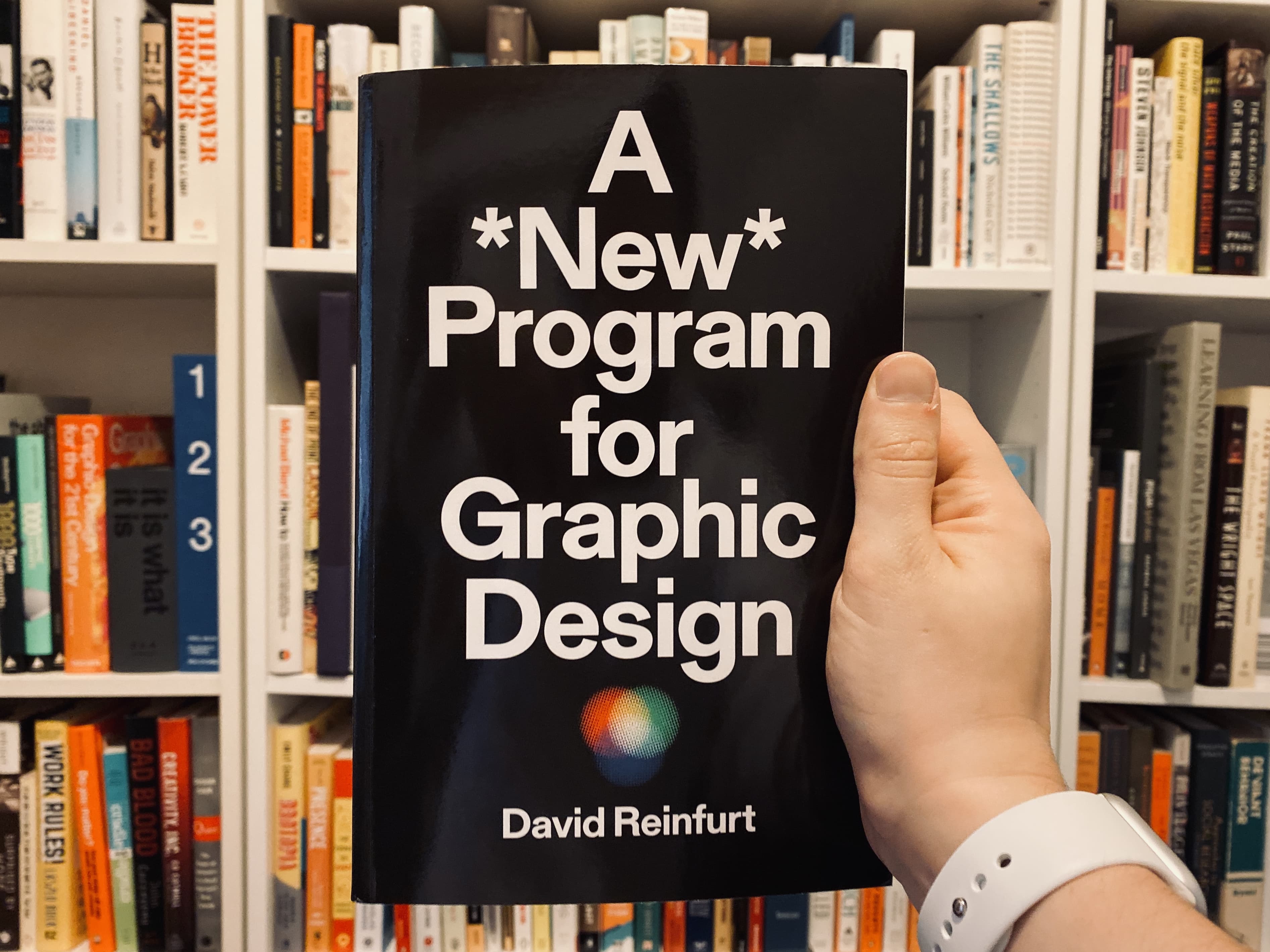 A *New* Program for Graphic Design by David Reinfurt is now available from Inventory Press.

A *New* Program for Graphic Design

“This is an experiment,” begins the new book by David Reinfurt, A New Program for Graphic Design, “and you’re all a part of it.” The experiment he’s talking about is, ostensibly, the creation of the book in your hands but it also can be read as an experiment in thinking about a new way to talk about graphic design.

Three of those classes — hyphenatedly named T-Y-P-O-G-R-A-P-H-Y, G-E-S-T-A-L-T, and I-N-T-E-R-F-A-C-E — were condensed into a three-day-marathon lecture (one fifteen week course per day) that Reinfurt delivered in Richard Neutra’s old studio last summer in Los Angeles. Those three days were then condensed again and transcribed to create A New Program for Graphic Design, published by Inventory Press last month. Billed as a graphic design textbook for the twenty-first century, I expected to learn how to do graphic design when I opened the book. What I experienced instead was a historical, discursive, and wandering personal manifesto for graphic design.

Because the process of making this book was one of translation — from undergraduate courses to lectures to text — Reinfurt’s language feels casual, conversational. Verbal ticks and elements of the live event — stray asides, references to the event space — remain in the text. The book feels less like a comprehensive look at graphic design, never making grand pronouncements about the discpline, and more like a wunderkammern with Reinfurt pulling out stories and objects and ideas to share with us, at times leaving it to us to make the connections, to develop our own ideas.

The structure of the book follows the three classes in which Reinfurt introduces us to a host of characters, both inside and outside design — from Benjamin Franklin to Oliver Saks, Laslo Maholy-Nagy to Susan Kare, Muriel Cooper to Albect Durer, and Bruno Munari — telling a larger story of design’s role in the world. Dividing the chapters are a series of assignments turning Reinfurt’s stories into practical experiments (designing an Apple watch interface, redesigning the stop sign, typesetting with a photocopier). These prompts allow us to put the theory into practice, showing us real world examples.

T-Y-P-O-G-R-A-P-H-Y begins by looking to Benjamin Franklin, a polymathic figure in this own right, who saw printing — and, in turn, graphic design – as a way to spread ideas. Reinfurt uses this as an anchor to take us through a brief history of printing technology from Gutenberg’s press to phototypesetting to Donald Knuth’s first digital type systems, Metafont. In between this technological history, we question Beatrice Ward’s seminal essay, The Crystal Goblet, consider Laslo Maholoy-Nagy’s The New Typography and take a quick detour to gaze upon Bruno Munari’s tree drawings as a metaphor for writing letterforms. “Writing gives the impression of things,” Reinfurt quotes designer Paul Elliman, “and conversely “things give the impression of writing.” For Reinfurt, typography is what connects both reading and writing. It is through typography, Reinfurt argues, that ideas are given shape.

In G-E-S-T-A-L-T, Reinfurt turns from words to images. Much like typography, images only function properly when viewed within a larger system. Using Rudolf Arnheim’s classic Visual Thinking, Reinfurt takes us through differences between perceiving and thinking, exploring the creation of signs and icons. Quoting Bauhaus designer and MIT professor Gyorgy Kepes: “To perceive a visual image implies the beholder’s participation in a process of organization. The experiences of an image is thus a creative act of integration.” Connecting another Bauhausser Max Bill’s clock designs and Susan Kare’s wrist watch icon to Paul Rand’s midcentury logo design work, as an examples of visual thinking, Reinfurt subtly argues for an increased literacy in the visual systems that shape our daily lives.

I-N-T-E-R-F-A-C-E, perhaps the most opened-ended of the chapaters, takes us on a wandering tour that mixes both history — Olivetti’s typewriters, the design of the Apple Watch — and Reinfurt’s own experience designing the interface for the New York MTA ticket process. Using the Italian critic Giancarlo Barbacetto’s definition of interfaces as ‘whatever lies between…whatever allows us to link to different elements, to reconcile them, to put them into communication’ Reinfurt suggests that all design, in fact, is an interface.

The title ‘graphic designer’ is credited to W.A. Dwiggins around 1922, when he used it to define his activities in and around printed communication: typography, illustration, and book publishing. In the century since, an educational system, discipline, and profession has built up around this term, even as its our definitions have expanded, been redefined and seem to be constantly in flux. Graphic design is still typography and printed communication but it’s also branding and strategy and apps and icons. If there’s a definition of design that works today, perhaps it’s Barbacetto’s: whatever allows us to link to different elements, to put them into communication. In the 1994 essay, Graphic Design Education as a Liberal Art, design educator Gunnar Swanson writes:

We must begin to believe our own rhetoric and see design as an integrative field that bridges many subjects that deal with communication, expression, interaction, and cognition. Design should be about meaning and how meaning can be created. Design should be about the relationship of form and communication. It is one of the fields where science and literature meet. It can shine a light on hidden corners of sociology and history. Design’s position as conduit for and shaper of popular values can be a path between anthropology and political science. Art and education can both benefit through the perspective of a field that is about expression and the mass dissemination of information. Designers, design educators, and design students are in a more important and interesting field than we seem to recognize.

David Reinfurt’s A New Program for Graphic Design is perhaps the first design textbook to take this to heart. Graphic design has never been more pervasive — from the watches on our wrists to the signs on the side of the road to the text editor I’m typing these words — and, in turn, it’s never been more complicated, more confusing. But in viewing design as a liberal art — as a discipline that bridges disciplines, as skills that can help anyone, designer or not, make sense of this increasingly visual world — Reinfurt shows the value of design is not simply in the crafting of images, but in helping us see and read them.

Working out the material, practicing in public, and embracing the process