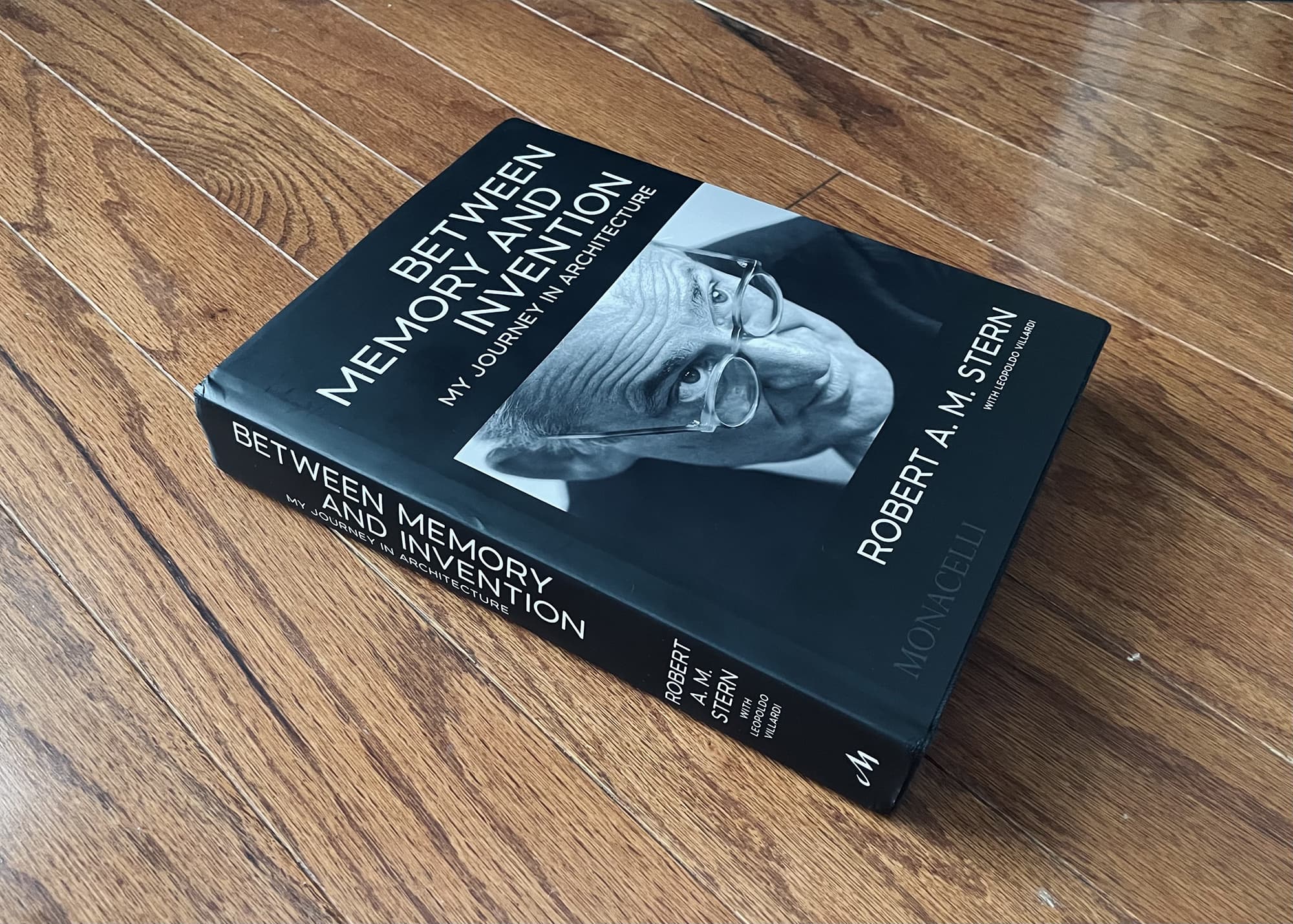 Between Memory and Invention by Robert A.M. Stern

Between Memory and Invention: Robert A.M. Stern and the intersection of history and practice

I’m pretty sure I learned about the architect Robert A.M. Stern and his work in 2006 when I bought a copy of Michael Bierut’s book 40 Posters for the Yale School of Architecture. Stern, who was then Yale’s dean, had commissioned Bierut to develop a cohesive identity for the school and Bierut responded with custom black and white posters for each season of visiting lectures. The long-running collaboration produced what are still some of my favorite poster designs. And for years that was my only relationship to Stern’s work aside from being aware that he designed the masterplan for Celebration, FL, the planned community developed by Disney, and the George W. Bush Presidential Library in Dallas. Stern’s new memoir, Between Memory and Invention: My Journey in Architecture, out next month from Monticelli, remedies this with a first-hand account of not only of Stern’s career but also the major intellectual debates in architecture of the last century.

Stern begins his book with his childhood in Brooklyn where looking at the quickly changing Manhattan skyline an interest in architecture was seeded early. He studied history first, writing about architecture for his thesis, before continuing his graduate education at Yale, under a program then headed by Paul Rudolph. It’s here that Stern’s story opens up, filtering a fascinating intellectual history of architecture through the lens of his own career. To watch the evolution of Stern’s practice and thinking around architecture is to understand the history of contemporary architecture as it moves from modernism to post-modernism and back again, tracking the rise and fall of different schools of thought and institutional figures.

In addition to Rudolph, Stern studied with architectural historian Vincent Scully and controversial architect and curator Phillip Johnson. His connections to these men return again and again throughout his life as he oscillates between allegiances, ideologies, and building modes. A surprising number of his career moments, in fact, can be traced back to Scully and Johnson. An academic as much as an architect, Stern spent as much time at Yale writing about architecture as much as designing. He contributed essays to journals and began a historical project on architect George Howe, spending time in the archives and libraries (and ultimately producing a monograph and biography of Howe years later.) While at Yale, he found himself caught in the middle of a newly raging debate between modernism and postmodernism and he jumped in with both feet. He became close friends with Robert Venturi and Denise Scott Brown, the leading postmodernists at the time, and penned essays and delivered lectures articulating what this new movement meant, becoming one of the intellectual leaders on the new stylistic and theoretical movement.

After graduation, Stern took an unconventional path: he worked in New York City government helping with city planning and preservation and worked as a curator for the Architectural League of New York (a job he got through Johnson), where he organized the 40 Under 40 Show alongside lecture series, publications, and journals. At the same time, he began designing houses for friends, slowly building up an architectural practice that would become Robert A.M. Stern Architects in 1977, a massive firm, today known simply as RAMSA, that’s built all around the world.

As much an autobiography as a history of architecture, the book reads as a who’s who of contemporary design discourse as his work and writing intersect with Johnson and Scully, Venturi and Scott Brown, Deborah Berke and Zaha Hadid, Frank Gehry and Harry Cobb, Alexandra Lange and Paul Goldberger. (It was fun, personally, to see photographs of many former Scratching the Surface guests from their younger years, before they built the careers I know them for.) By coincidence, I read Stern’s book alongside Herbert Muschamp’s collected essays and marveled at the overlap in subjects, as both tracked the history of architecture from different vantage points.

But it’s his early career that was interesting to me, perhaps because it feels like where I am in my own career and perhaps because it mirrors the career I want for myself. Stern’s career echos that of many architects I admire like Rem Koolhaas or Daniel Libeskind, whose early work lived on the edges of design: working as writers, theorists and teachers as a way to build up a practice. (Stern’s mentor, Philip Johnson, is the same way). While my early career was in traditional graphic design, I see my current work in this same model — experimental, theoretical, academic — and am curious how or if this work will make its way back to a professional context. Stern is interesting model to look at to better understand how this early work influenced the design work he’d later do; work that’s infused with history and rooted in theoretical ideas, yet broadly accessible and aesthetically interesting.

In this regard, the book seems to hit on my primary interests: the intersections of both theory/history and practice and arts and administration. It’s rare to see an inside account of how working as a college administrator intersects with creative practice, for example, or how one works towards tenure while also running a studio. I enjoyed reading how he approached his deanship, both thinking about curriculum and community, what it means to be an architect and what it means to be an architecture school. Time and again in Stern’s career, he’s worked simultaneously as a critic and a practitioner, a historian and an observer of contemporary practice. As junior faculty and a (still, kind of) young practitioner, I found many insights in Stern’s accounts and journey.

Between Memory and Invention, for me, sits alongside books like Reinier de Graaf’s Four Walls and a Building and Michael Bierut’s 79 Short Essays on Design. These two books, and now Stern’s, felt like a peak inside a world I wanted to be a part of, giving the reader an inside look at work that so often happens behind the scenes. As with any autobiography, the book is colored by the author’s memory: Stern often sets himself up as the hero in stories and glosses over mistakes or backtracks. Yet despite these shortcomings, Between Memory and Invention is one of those strange books that made me not only excited about the future of design, but also the future of my own career.

Design Journalism is the First Draft of Design History