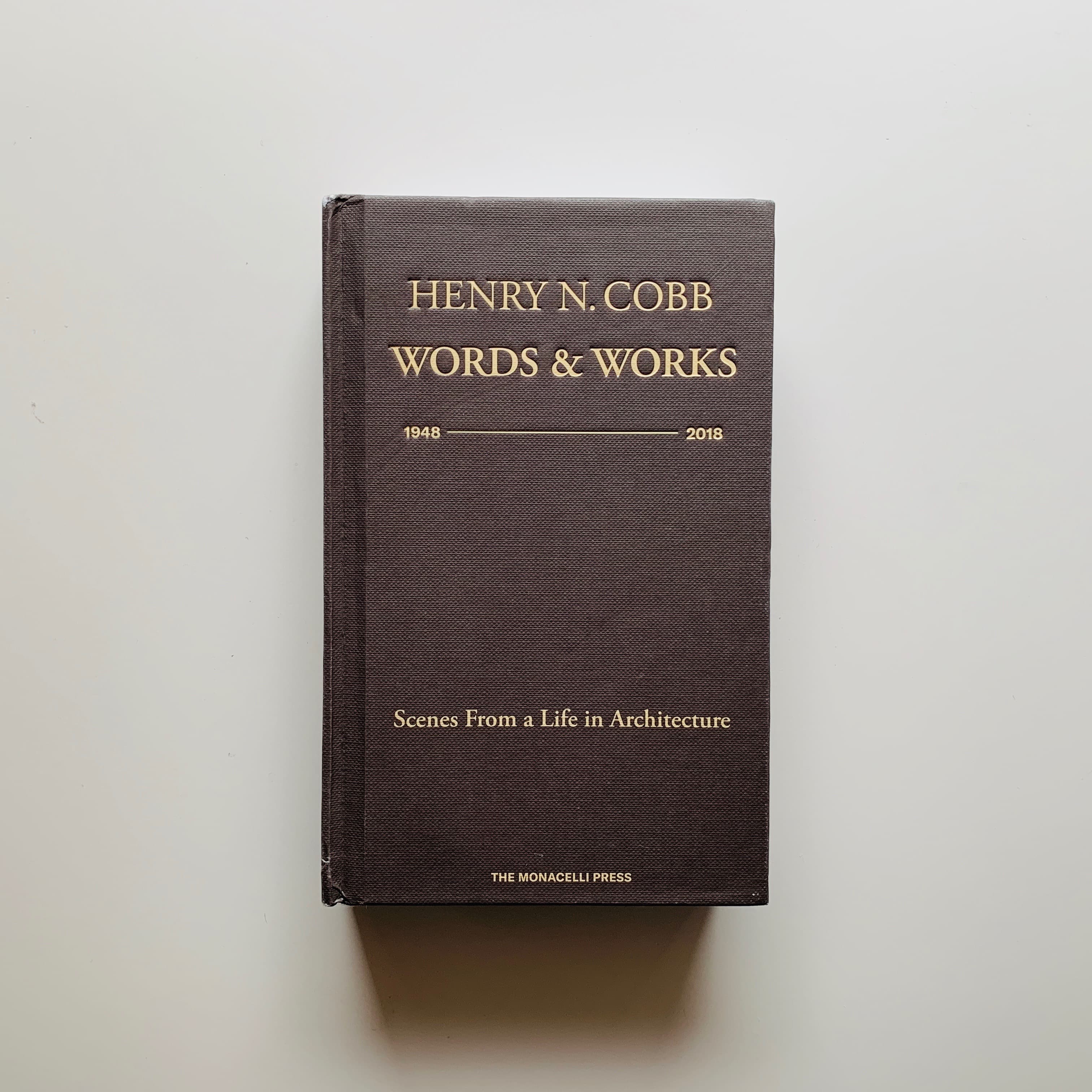 This is the best design monograph I’ve ever read

For Design Observer, I wrote a short review of what I believe to be the best designer monograph I’ve ever encountered: Henry N. Cobb: Words and Works. I picked it up at the recommendation of Michael Beirut, knowing nothing about Henry Cobb and was almost immediately taken with this little object. As I write in the piece:

Henry N. Cobb: Words And Works is the best design monograph I’ve ever read. Yes, I mean read. This is not simply a glorified portfolio, an overly-heavy tome bursting with images. This is a monograph that’s meant to be read just as much as it is to be looked at. Its small footprint — a compact 4.5x7.5”, beautifully designed by the Boston design studio OverUnder — immediately suggests a different kind of design book — an ‘un-monograph, as they call it — one that mixes both built and unbuilt work with interviews, lectures, essays, and texts from Cobb’s nearly seventy year career.

If you’re like me, Henry Cobb isn’t a name you know. I had never heard of Henry Cobb before picking up the book (I picked it up at the recommendation of Michael Bierut, on the year-end episode of The Observatory) but you know at least some of his work. For some background: Cobb graduated from the Harvard Graduate School of Design in 1949, where he studied under Walter Gropius. He went on to co-found I.M Pei & Associates (later renamed Pei Cobb Freed and Partners in 1989) and worked along side his more-famous partner since the 1955. For five years from 1980-1985, he returned to Harvard as chair of the architecture department. Now at 93, Words and Works reads more like a journal or memoir, attempting to untangle and reflect upon this multi-decade career, contextualizing the move from modernism to post-modernism, and continually wrestling with the role of architecture in society.

I’ve thought a lot about monographs over the last five years or so and what makes a good monographs, something that exists beyond the glorified portfolio. The monographs I love the most are the ones that incorporate other voices and perspectives aside from the designer, do more than show finished work (let me see sketches, early revisions! I want to read about the work the work too) or somehow break the form of what we consider a monograph (playing with size, images, etc). The Experimental Jetset monograph comes to mind, as does SMLXL. Henry Cobb’s new book easily fits all the criteria.

You can read my entire review over on Design Observer.

In the editing process for the piece, a lot of Cobb’s writing got cut from my essay but I still wanted to share some of his insights in practice, architecture, theory, and teaching. Here’s my favorite passage from the book, as Cobb articulates the overlap of criticism, theory, and practice:

To achieve any real cross fertilization between theory and practice, criticism must examine the questions asked as well as the answers given. The failure of our culture to produce this level of criticism is deeply disappointing, and it is this failure, I would argue, that has led to what you call the present malaise.

A recurring theme in the book — and Cobb’s entire practice — is context and place. Here he’s writing about how a building is situated in both its physical and cultural context:

There are two very distinct classes of context or situation within which a building takes form. The first it is physical or environmental context, which scarcely needs further definition. The interpretation of this context may be easy or difficult, and there may be doubt about what constitutes a suitable response to it. But the facts are unarguable. They are clearly perceptible and at least momentarily immutable. An astute architect can readily comprehend and interpret the physical context. The second class of contexts, which I shall call societal, defines the programmatic and institutional situation of the building. The societal context is often obscure, complex, and high unstable. It is vulnerable not only to misinterpretation but equally misconception.

This leads to Cobb’s other theme: citizenship. He sees architecture (and design) as an ethical discipline and our work should be good citizens in their communities:

I hold to the opinion that architecture cannot escape an active engagement with the issues and conflicts that comprise the human condition. We cannot stand above or apart from those issues — be they social, ethical, cultural, technical, ecology — because it is only be engaging them that we may find significant subject for our art. And lacking a significant subject, any art however disciplined, however finely wrought, is soon reduced to a mere cipher.

What do we mean when we refer to architecture as a social art? We mean, I believe, that the subject of architecture is the human condition, and that architecture makes its strongest appeal when, having satisfied all requirements of use and technique, it memorably portrays that condition while shaping our experience of the physical world.

And to come full circle, back to criticism and one a topic dear to my own heart, how we talk about design:

In The Dynamics of Architectural Form, Rudolf Arnheim cites the Hancock Tower as an example of catastrophic disorder and declares that the building “betrays its guilty conscious.” I prefer to acknowledge, as you say, that it betrays the anxiety of its predicament. And that is precisely the sense in which the building is poetic: I mean simply that the tower makes evident with exceptional clarity the predicament affecting all works of architecture. It is the predicament of architecture’s dual nature. How we evaluate a work of architecture depends on which element of his duality we are considering. If we think of the building as a work of art, then everything is in the word, and attempting to evaluate it in terms of generalized ideas of right and wrong tends t one a meaningless exercise. But a work of architecture also has a societal function, and in evaluating its performance as a citizen, general ideas of right and wrong — that is to say, ethical principles — arguably do apply. And architects cannot casually excuse themselves from obligation to respect these principles by assuming the mantle of art.

For five years, Cobb was the chair of the architecture program at Harvard and some of my favorite moments in the book were his reflections on teaching, developing a program’s culture and what we teach when we teach design. He captures the tension I feel all the time between teaching skills and teaching thinking:

Alfred North Whitehead in The Aims of Education and Other Essays wrote “necessary technical excellence can only be acquired by a training which is apt to damage those energies of mind that ought to direct the technical skill.”

I can’t recommend the book enough. It’s one I’ll be returning to again and again and a perfect model for what we should want from designer monographs.

Gehry in Black and White

The Pedagogy of Elizabeth Warren