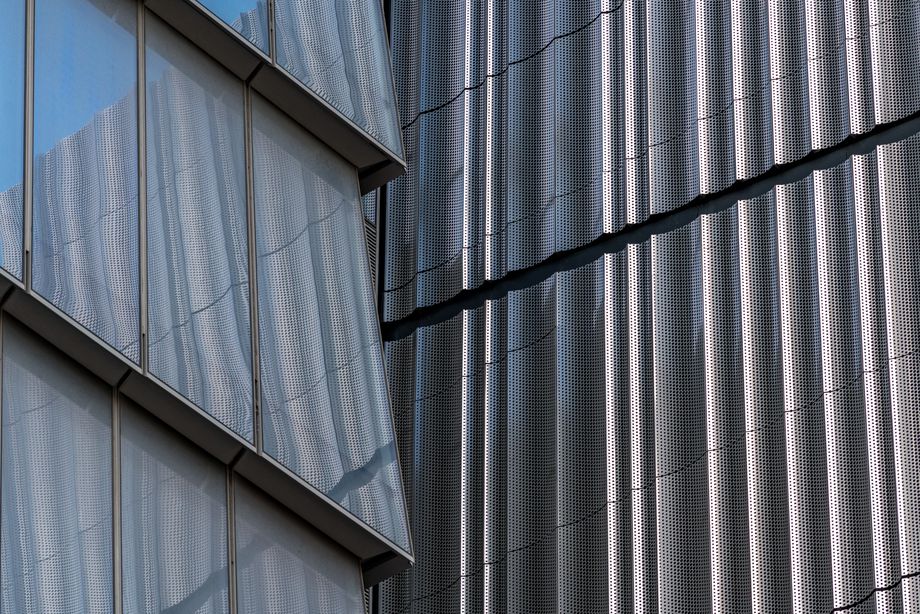 I’ve enjoyed reading the plethora of essays, critiques, commentary, and thinkpieces about Hudson Yards — the new neighborhood/development/attraction on Manhattan’s west side, at the northern tip of the High Line. While the reactions and responses to Hudson Yards’s development appears mixed, there is a consistent thread of raising questions around who this neighborhood is for, what is means for one developer — in this case, Related Companies, to essentially conjure a neighborhood out of thin air, and what it means for the future of New York City.

The first piece to read is Carl Swanson’s profile of Stephen Ross — the 78-year-old founder and chairman of Related Companies — the developer behind the construction, a Robert Moses-esque figure who dreamed up Hudson Yards:

Ross, for now at least, lives in one of his previous developments, the Time Warner Center (in an 8,300-square-foot penthouse). He also works there (in an office overlooking Central Park) and often eats out there (in Per Se, Masa, and Porter House, the last of which he is a part-owner) and, when he’s in the mood, takes in a show there (at Jazz at Lincoln Center). If he needs gluten-free chips, Whole Foods is downstairs. For days on end, “I don’t even go outside sometimes,” he admits. But “I do own a coat.”

Hudson Yards is essentially the Rossian lifestyle at a supersized scale. Related calls Hudson Yards a “city within a city” and “New York’s next great neighborhood.” Ross presents this vision of tomorrowland as solving a series of problems you might have not have known you could buy yourself out of: “When you live in New York, you want everything at your fingertips,” he explains. “Getting around from one part of the city [to another], the subway system, people don’t want to go on it because of all the problems,” he says, an assessment that might come as a surprise to the city government, which paid to extend the 7 train out to Hudson Yards in order to make the site viable to tenants.

Ross will soon reside in 35 Hudson Yards, designed by David Childs, who also designed Time Warner (and got a Porsche from Ross as a reward when the condos sold out). The new building will house, in addition to condos and offices, the world’s first Equinox Hotel (Related owns the high-end fitness-club chain), the website of which promises frictionless exaltation: “This is the complete manifestation of high-performance living. This is a destination where how you move, eat, sleep and live is entirely reimagined. This is your life. Live it exceptionally.” 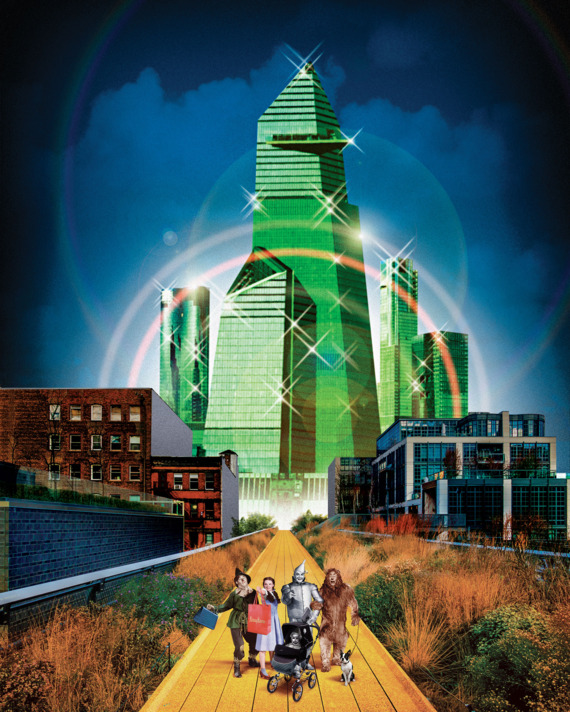 Swanson’s piece was part of twin-cover stories for New York magazine about the development. Justin Davidson, New York’s architecture critic, who examined the buildings and landscape of the site:

Ross wants his tenants to feel as though they occupy the best building in the best neighborhood in the best borough of the greatest city in the world. The bestness is all. Still, this is a privatized idyll, where the concept of public good stops at the property line. West 31st and 32nd Streets dead-end at the shopping mall’s forbidding wall along Tenth Avenue. When an architect agitated for a more lavish cladding, a Related executive waved him away. “Who’s going to see it?” he asked. For the developers, the towers gather round a central stage. The rest of the city is its back-of-house.

In this West Side Westworld, every aspect of the experience is curated by an unseen hand. Everything is engineered to suck passersby onto the property and keep them there, spending money, as long as possible. There are no storefronts in this version of New York, only indoor pathways through the seven-story shopping center. Visitors can browse at Van Cleef & Arpels as they wait for their table at Thomas Keller’s TAK Room or their time slot on the observation deck. For many office workers, the shortest distance from subway to desk leads past Tiffany.

It’s possible to live a full and varied life here — to sleep, put in an hour at the gym, bring the kids to school, drop the dog off at day care, go to the office, shop, eat out, visit a museum, and catch a show — without so much as crossing the street. That kind of total-service completeness has been a goal of smart-growth urbanists for many years, but it’s one thing to apply those aspirations to a semi-citified development around a suburban transit station, in the hope that it won’t go dead after rush hour. It’s a very different, and more disquieting, achievement to create a high-rise district on a plinth so sealed-off and yachtlike that nobody need ever leave.

I enjoyed Michael Kimmelman review in the New York Times — complete with some nice animations and video walkthroughs — who draws a comparison between Hudson Yards and Rockefeller Center:

Already, a who’s who of blue-chip hedge funds, law firms and other corporations — SAP, KKR, BlackRock, Wells Fargo, L’Oréal USA, the list goes on — have chosen to move in or will do, when yet another giant office tower, now underway, is completed. WarnerMedia and CNN are migrating from the Time Warner Center at Columbus Circle, Related’s earlier high-end, mixed-use, mall-centered venture. Star chefs, including Thomas Keller and David Chang (also Columbus Circle tenants), will run restaurants at Hudson Yards, where Neiman Marcus, Cartier, Dior, Gucci, Fendi and more of the usual suspects hope to defy obvious retail trends. Not yet joining the caravan are companies like Google, Twitter and Facebook. Related’s antiseptic, inward-turning, glass-tower formula doesn’t seem to speak to the tastes of cutting edge industries or younger, urban-minded millennials.

Ninety percent of Hudson Yards’ office tenants, according to a recent study by the New School, are also transfers from Midtown, lured by lucrative tax breaks provided by New York politicians to the developers. Moving from Midtown, the investment company BlackRock, which manages $5.98 trillion, will be able to write off $25 million in state tax credits if it adds 700 jobs at Hudson Yards. The terms du jour are corporate welfare or socialism for billionaires. City officials sold Hudson Yards to New Yorkers as a self-financing venture. That’s not what it may sound like. The city and state provided tax incentives and poured billions of public dollars into an extension of the No. 7 subway line and into acres of open space around the yards — investments presumably benefiting everyone, which the project is supposed to pay back by increasing New York’s GDP.

We’ll see how and when that happens. As the New School study documents, so far the project is shifting economic development from other neighborhoods to Hudson Yards without creating new net growth. That said, this shift has spurred more developers to build their own mega-towers near the yards. A new place is emerging. The question is, what sort of place?

I had never heard of Jake Bittle or The Point but I loved his essay, that connects Moses and Jane Jacobs, again comparing Hudson Yards to Rockefeller Center, as well as Rem Koolhaas’s seminal Delirious New York:

Hudson Yards is not the first walled-off community built within the Manhattan grid. In the 1930s über-planner Robert Moses (Jacobs’s longtime nemesis) helped build Stuyvesant Town on the Lower East Side, blowing up an entire neighborhood and replacing it with an enormous planned community. Stuy Town explicitly appealed to young families who might have otherwise packed out to the suburbs: the street grid was supplanted by a manicured, middle-class community with sequestered courtyards, its 35 towers arranged around a central oval.A few decades later, the city filled in a section of the Hudson River in order to build Battery Park City on the lower tip of Manhattan. Separated from downtown by a ten-lane highway, the development offered yuppies a secluded community within walking distance of the Wall Street offices where many of them worked.

Both of these developments represent a rebuke of Koolhaas’s “culture of congestion.” Hudson Yards shares a lineage with them just as it does with Rockefeller Center. Like Stuyvesant Town, its construction will destroy much of the neighborhood that existed around it, including plenty of long-running delis and prewar buildings with dentil cornices. And like Battery Park City, it promises residents an escape from the heterogeneity of the city even as it trades on its extreme proximity to it. But one doubts whether even the most committed nostalgist would claim that the construction of Stuyvesant Town or Battery Park City constituted the “death of New York.” On the contrary, the greatness of a city like New York would seem to be that it is too heterogeneous to be destroyed by any one of its component parts—it cannot, by definition, be the site of a “monoculture.”

Kate Wagner, of McMansion Hell fame, has a scathing takedown of The Vessel, Thomas Heatherwick’s sculpture (?) at the center of the neighborhood, for The Baffler:

The Vessel is a structure that invites parody—it has already been likened to a giant shawarma, a beehive, a pine cone, a wastebasket. Apparently, there is to be a competition for a new name, as “The Vessel” was only supposed to be a temporary one. It really is the perfect name, however, not least because it implies a certain emptiness. One asks, though, what it is a vessel for?

And of course, I loved my friend Alexandra Lange’s review in Curbed about Hudson Yards’s pitch that is it the city of the future:

“For all the talk of Hudson Yards as being the first North American smart city, it doesn’t feel like the future, except for perhaps the video screens that advertise, offer touchscreen wayfinding, ticketing, and—surprise!—enclose cameras that watch your every move. The majority of innovations called out on the press packet sheet labeled “Engineered City” are largely under the hood: A constant stream of inputs monitored by “operations managers” will allow Hudson Yards, the sentient being, “to monitor and react to traffic patterns, air quality, power demands, temperature and pedestrian flow to create the most efficiently navigated and environmentally attuned neighborhood in New York.”

Think of it as the next generation of contested public space. This is also—ahem—the promise of the platform at the highly contested Sidewalk Toronto, where traffic, wind, and winter will be overcome through the collection of data. It is no coincidence that the corporate HQ for Sidewalk Labs is located in 10 Hudson Yards; Sidewalk’s Dan Doctoroff was the original mover for the site’s development, way back when he led the city’s bid for the 2012 Olympics in 2001.

We always knew it would be like this, because this is what you get when you let a private developer make a neighborhood—there’s no room for weirdness. Even if you hire different architects, their work comes out the same. If you look at 15 and 35 Hudson Yards from the waist up, can you tell which one is designed by perennial frontrunners for the Pritzker Prize, and which by the architect of One World Trade Center?”

When I lived in Baltimore and would take the bus up to New York, the stop was at the northern most edge of what has become Hudson Yards. During those many trips, I’d arrive in New York and catch a glimpse of progress at the site. I remember riding the new 7 train for the first time and seeing the buildings get ever taller. I’ve yet to see it with everything opened but I’m curious to visit soon and experience it for myself.

AppleTV+ and HBO vs. Netflix

Reinier de Graaf on research as design, architecture as a conceptual practice, and his new book